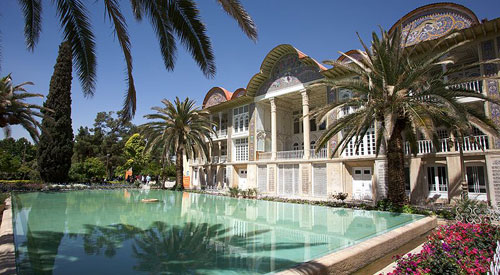 Shiraz is a city of sophistication that has been celebrated as the heartland of Persian culture for more than 2000 years. Known as the Dar-ol-Elm (House of Learning),the City of Roses,City of Love and City of Gardens,Shiraz has become synonymous with education,nightingales,and poetry.

It was one of the most important cities in the medieval Islamic world and was the Iranian capital during the Zand dynasty (AD 1747–79),when many of its most beautiful buildings were built or restored.This city is situated in the south east of Iran and is the capital city of Fars Province,with a popullation of about 1 500 000. Shiraz is mild in spring and hot in the summer. The autumns in Shiraz are not too cold; however,the winters tend to be quite cold.

Sayyed Mir Ahmad,one of Imam Reza’s 17 brothers,was hunted down and killed by the caliphate on this site in AD 835. His remains are housed at the glittering Aramgah-e Shah-e Cheragh. A mausoleum was first erected over the grave during the 12th century but most of what you see dates from the late-Qajar period and the Islamic Republic; expansion is ongoing.

Persepolis (Old Persian: Parsa,Takht-e Jamshid or Chehel Minar) was the ceremonial capital of the Achaemenid Empire (ca. 550-330 BCE). Persepolis is situated 70 km northeast of the modern city of Shiraz in the Fars Province of modern Iran. In contemporary Persian,the site is known as Takht-e Jamshid (Throne of Jamshid). The earliest remains of Persepolis date from around 515 BCE. To the ancient Persians,the city was known as Parsa,which means "The City of Persians".

Shiraz’s ancient trading district is comprised of several bazaars dating from different periods. The finest and most famous is the Bazar-e Vakil,a cruciform structure commissioned by Karim Khan as part of his plan to make Shiraz into a great trading centre. The wide vaulted brick avenues are masterpieces of Zand architecture,with the design ensuring the interior remains cool in summer and warm in winter.

Today,it’s home to almost 200 stores selling carpets,handicrafts,spices and clothes and is one of the most atmospheric bazaars in Iran,especially in the early evening when it is fantastically photogenic. As usual,it’s best explored by wandering without concern for time or direction,soaking up the atmosphere in the maze of lanes leading off the main thoroughfares.

Iranians have a saying that every home must have two things: first the Quran,then Hafez. Hafez is an influential Iranian poet. Almost every Iranian can quote his work,bending it to whichever social or personal persuasion they subscribe to. And there is no better place to try to understand Hafez’s eternal hold on Iran than at Aramgah-e Hafez,his tomb. Set at the back of the ground of Hafez’s tomb is a teahouse which is a great place to chill out with some live traditional music and a cup of chay .

Walking through the southeastern (back) entrance to the Shah-e Cheragh courtyard and turning right after about 50m leads to the ancient Jameh-ye Atigh Mosque. Dating from 894 this is Shiraz's oldest Islamic structure,though most of what you see is from the late Safavid period onwards.

While the dome of the north iwan and the hypostyle columns in the ancient prayer hall in the southeast corner are impressive,the highlight is the rare turreted Khodakhaneh. It was built in the mid-14th century (or perhaps earlier) to preserve valuable Qurans; poet Hafez is believed to have worked here. The Khodakhaneh (House of God) bears an uncanny likeness to the Kaaba at Mecca,and bears a unique Sassanid-style Tholth inscription in raised stone characters on a tiled background.

The beautiful Masjed-e Vakil was begun by Karim Khan and is the only major mosque surviving from the late Zand period. Beside the entrance to the bazaar,it has two vast iwans to the north and south,a magnificent inner courtyard surrounded by beautifully tiled alcoves and porches,and a pleasingly proportioned 75m-by-36m vaulted prayer hall supported by 48 carved columns. Inside the prayer hall are an impressive mihrab and 14-step marble minbar, carved from a monolith carried all the way from Azerbaijan. Much of the tiling,with its predominantly floral motifs and arabesques,was added in the early Qajar era.

Bagh-e Naranjestan is Shiraz’s smallest garden and is famous as the setting for the opulently decorated Naranjestan-e Ghavam pavilion,built between 1879 and 1886,as part of a complex owned by one of Shiraz’s wealthiest Qajar-era families. The pavilion’s mirrored entrance hall opens onto rooms covered in a breathtaking combination of intricate tiles,inlaid wooden panels and stained-glass windows. Ceilings in the upstairs rooms are particularly interesting,with the beams painted with European-style motifs,including Alpine churches and busty German frauleins.

Down a small lane beside the garden is the Khan-e Zinat ol-Molk,which was originally the private,andaruni area of the complex and is named after its last owner,the daughter of the builder Qavam. Today most of the finely decorated rooms are stuffed with exhibits in the Fars History Museum,while others serve as galleries for young Shirazi artists. The gardens are in a walled compound 400m south of the Nasir ol-Molk Mosq.

Famous for its tall cypress trees,the delightful Bagh-e Eram will impress visitors of all ages with its stunning sceneries and various flowers and trees. The gardens are managed by Shiraz University. The gardens are easy enough to reach by taking any shuttle taxi going along Zand towards the university.

The Aramgah-e Sa’di and its generous surrounding gardens are appropriate for a man who wrote so extensively about gardens and roses. It’s a tranquil place,with the tombstone housed in an open-sided stone colonnade,inscribed with various verses from Sa’di and supporting a tiled dome.