Iran (Persian) officially the Islamic Republic of Iran, is a country in Central Eurasia and Western Asia. The name Iran has been in use natively since the Sassanian era and came into use internationally in 1935, before which the country was also known to the western world as Persia. Both Persia and Iran are used interchangeably in cultural contexts; however, Iran is the name used officially in political contexts.

The 18th largest country in the world in terms of area at 1,648,195 km2 (636,372 sq mi), Iran has a population of over 74 million. It is a country of particular geostrategic significance owing to its location in the Middle East and central Eurasia. Iran is bordered on the north by Armenia, Azerbaijan and Turkmenistan. As Iran is a littoral state of the Caspian Sea, which is an inland sea and condominium, Kazakhstan and Russia are also Iran's direct neighbors to the north. Iran is bordered on the east by Afghanistan and Pakistan, on the south by the Persian Gulf and the Gulf of Oman, on the west by Iraq and on the northwest by Turkey. Tehran is the capital, the country's largest city and the political, cultural, commercial and industrial center of the nation. Iran is a regional power, and holds an important position in international energy security and world economy as a result of its large reserves of petroleum and natural gas. 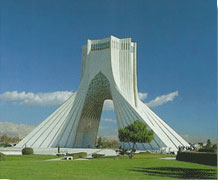 Iran is home to one of the world's oldest continuous major civilizations. The first Iranian dynasty formed during the Elamite kingdom in 2800 BC. The Iranian Medes unified Iran into an empire in 625 BC. They were succeeded by the Iranian Achaemenid Empire, the Hellenic Seleucid Empire and two subsequent Iranian empires, the Parthians and the Sassanids, before the Muslim conquest in 651 AD. Iranian post-Islamic dynasties and empires expanded the Persian language and culture throughout the Iranian plateau. Early Iranian dynasties which re-asserted Iranian independence included the Tahirids, Saffarids, Samanids and Buyids.

The blossoming of Persian literature, philosophy, medicine, astronomy, mathematics and art became major elements of Muslim civilization and started with the Saffarids and Samanids. Iran was once again reunified as an independent state in 1501 by the Safavid dynasty,who promoted Twelver Shi'a Islam as the official religion of their empire, marking one of the most important turning points in the history of Islam. "Persia's Constitutional Revolution" established the nation's first parliament in 1906, within a constitutional monarchy. Iran officially became an Islamic republic on 1 April 1979, following the Iranian Revolution.

Iran is a founding member of the UN, NAM, OIC and OPEC. The political system of Iran, based on the 1979 constitution, comprises several intricately connected governing bodies. The highest state authority is the Supreme Leader. Shia Islam is the official religion and Persian is the official language.

Iran History from the outset of governments

The topic of Iran History is a very long and complicated one, including thousands of years of history. What we are more concerned about is the history of Iran with an outlook to study its various governments ruling as long as the historical documents can approve them.

We can make the long history of Iran easier to follow and remember by dividing it into major periods:

• Pre-Islam Iran (from Elamites to Sassanids)

Also, a turning point at the history of Iran, which is of high importance in our study of this history, is contemporary Iran, meaning about the last century.